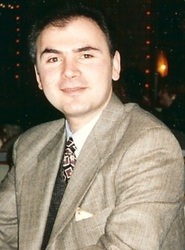 Dejan Stojanovic was born in Pec, Kosovo (formerly Yugoslavia), in 1959. Although he is an education lawyer, he never practiced law and instead became a journalist, working as a journalist in the early nineties. He is a poet, curator, philosopher, and businessman and has published six books critically criticized in Serbia: Circling, The Sun Watches itself, The Sign and His Children, Shape, Creator, and Dance of Time. In 1986, as a young writer, he was recognized among the 200 writers at the Bor (formerly Yugoslavia) Literary Festival. He has also received the Honorable Rastko Petrovic Award from the Serbian Writers' Society for his book of interviews with major European and American painters. In addition to poetry and prose, he has worked as a reporter for the Serbian weekly magazine "Pog Pog" (Views). His interview book from 1990 to 1992 in Europe and the United States, entitled Conversations, included interviews with several American authors, including Nobel Laureate Saul Bellow, Charles Simic, and Steve Tesic. He has been living in Chicago since 1990.

“My feelings are too loud for words and too shy for the world.”

“To hide feelings when you are near crying is the secret of dignity.”

“I am the shore and the ocean, awaiting myself on both sides.”

“Use the wings of the flying Universe, Dream with open eyes; See in darkness.”

“The most complicated skill is to be simple.”

“Wherever I go, I meet myself.”

“Even if you are alone you wage war with yourself.”

“To risk life to save a smile on a face of a woman or a child is the secret of chivalry.”

“A breeze, a forgotten summer, a smile, all can fit into a storefront window.”