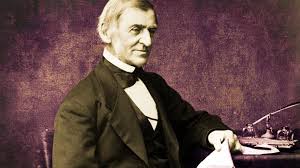 Ralph Waldo Emerson was born May 25, 1803, in Boston, Massachusetts. In 1821, he took over as the director of his brother's school. In 1823, he wrote the poem "Bye." In 1832, he became a Transcendentalist, which led to the recent books "Confidence" and "The American Scholar." Emerson continued to write and lectures in the late 1870s. He died April 27, 1882, in Concord, Massachusetts.

Though we travel the world over to find the beautiful, we must carry it with us or we find it not.

Tell them dear, that if eyes were made for seeing, then beauty is its own excuse for being.

As we grow old, the beauty steals inward.

If we encounter a man of rare intellect, we should ask him what books he reads.

Beware what you set your heart upon. For it surely shall be yours.

Good luck is another name for tenacity of purpose.

I like the silent church before the service begins, better than any preaching.

A man must consider what a rich realm he abdicates when he becomes a conformist.

If the stars should appear but one night every thousand years how man would marvel and adore.

Speak the truth, and all nature and all spirits help you with unexpected furtherance.

Sometimes a scream is better than a thesis.