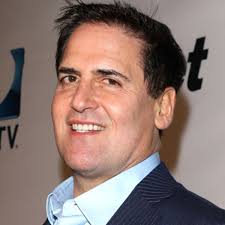 Businessman and owner of the prestigious sports club Mark Cuban has ventured into many different businesses. He made his fortune by selling MicroSolutions and Broadcast.com in the 1990s, and later became known as the enthusiastic owner of the NBA Dallas Maverick. Cuba has also invested in filmmaking and appeared in the TV series Dancing with the Stars and Shark Tank.

It doesn’t matter how many times you have failed, you only have to be right once.

“There is no sport as competitive as business.”

“Treat your customers like they own you. Because they do.”

“It doesn’t matter how many times you fail. You only have to be right once and then everyone can tell you that you are an overnight success.”

“I look at my annual budgets for everything and anything, and I look to see where I can save the most money on those items. Saving 30% to 50% buying in bulk – replenishable items from toothpaste to soup, or whatever I use a lot of – is the best guaranteed return on investment you can get anywhere.”

“Don’t start a company unless it’s an obsession and something you love. If you have an exit strategy, it’s not an obsession.”

“I’m a believer that you accomplish much, much more with direct relationships than by using an intermediary. And that cash you keep in the bank can be the difference between staying alive as a small business, or not.”

“Work like there is someone working twenty-four hours a day to take it all away from you.”

“I wouldn’t be where I am now if I didn’t fail a lot. The good, the bad, it’s all part of the success equation.”

“What I’ve learned in these 11 years is you got to stay focused and believe in yourself and trust your own ability and judgment.”

“Everyone is passionate about something. Usually more than one thing. We are born with it. There are always going to be things we love to do. That we dream about doing. That we really, really want to do with our lives. Those passions aren’t worth a nickel.”