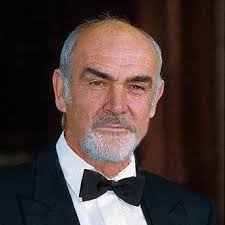 Sean Connery is an eminent Scottish producer and actor who was the first one to play the role of James Bond in 'Bond' films, starring in seven of them, from 1962 to 1983. He has bagged in numerous awards and accolades for his performances, including three ‘Golden Globes,’ an ‘Academy,’ and two ‘BAFTA Awards,’ besides various others. Some of his renowned works include ‘The Untouchables,’ ‘The Hunt for Red October,’ ‘Marnie,’ ‘Murder on The Orient Express,’ ‘The Rock,’ ‘The Name of The Rose,’ and many more. We have compiled quotes by Sean Connery which have been compiled from his films, dialogues, interviews, etc.

My first big break came when I was five years old. It's taken me more than seventy years to realise that. You see, at five I first learnt to read. It's that simple and it's that profound.

There is nothing like a challenge to bring out the best in man.

A martini. Shaken, not stirred.

But I wouldn't call myself sadistic.

I don't know anything about baseball.

I find that fame tends to turn one from an actor and a human being into a piece of merchandise, a public institution.

The media already attempts to assassinate my character in Scotland when I'm there, so my position is much more effective if I'm outside Scotland and am part of the voice of what the Scottish National Party is about.

People used to call me Bond in the street. It was impossible to avoid crowds of people all over the place and blinding flashguns. The Beatles had to run the gauntlet as well, but at least there were four of them!