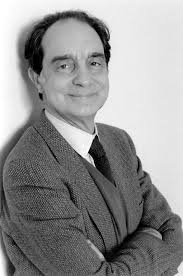 Italo Calvino (October 15, 1923 - September 19, 1985) was a famous Italian novelist and one of the leading writers of 20th-century post-modern writing. After beginning his writing career as a political activist, Calvino will continue to produce short but shiny novels that serve as an inquiry into reading, writing and thinking itself. However, it would be wrong to call Calvino's late style a complete break from his previous career. Legends, as well as oral telling stories in general, were among the great inspiration of Calvino. Calvino spent the 1950's searching for and writing examples of Italian literature, and his masterpieces were published in a respected English translation of George Martin. But word of mouth is also prominent in invisible cities, perhaps his most famous novel, and it contains many symbolic conversations between Vietnamese traveler Marco Polo and Tartar ruler Kublai Khan.

"A classic is a book that has never finished saying what it has to say."

"Melancholy is sadness that has taken on lightness."

"Arriving at each new city, the traveler finds again a past of his that he did not know he had: the foreignness of what you no longer are or no longer possess lies in wait for you in foreign, unpossessed places."

"Cities, like dreams, are made of desires and fears, even if the thread of their discourse is secret, their rules are absurd, their perspectives deceitful, and everything conceals something else."

"What harbor can receive you more securely than a great library?"

"The ideal place for me is the one in which it is most natural to live as a foreigner."

"The things that the novel does not say are necessarily more numerous than those it does say and only a special halo around what is written can give the illusion that you are reading also what is not written."

"One reads alone, even in another's presence."

"Who are we, who is each one of us, if not a combinatoria of experiences, information, books we have read, things imagined?"

"Reading is going toward something that is about to be, and no one yet knows what it will be."

"Falsehood is never in words; it is in things."

"You take delight not in a city's seven or seventy wonders, but in the answer it gives to a question of yours."