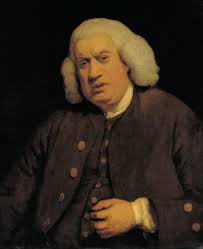 Samuel Johnson (September 18, 1709 - December 13, 1784) was an English writer, critic, and celebrity of the 18th century. While his poetry and works of mythology - though well-executed and well-received - are rarely considered among the great works of his time, his contributions to the English language and to the field of literary criticism are remarkable. It is also remarkable Johnson's fame; he is one of the earliest examples of a modern writer who gained great fame, for his greatness and personality, as well as for the great posthumous biography published by his friend and acolyte James Boswell, The Life of Samuel Johnson.

"From the middle of life onward, only he remains vitally alive who is ready to die with life."

"Things don't go wrong and break your heart so you can become bitter and give up. They happen to break you down and build you up so you can be all that you were intended to be."

"Adversity leads us to think properly of our state, and so is most beneficial to us"

"The trade of advertising is now so near perfection that it is not easy to propose any improvement. But as every art ought to be exercised in due subordination to the public good, I cannot but propose it as a moral question to these masters of the public ear, whether they do not sometimes play too wantonly with our passions."

"Advertisements are now so numerous that they are very negligently perused, and it is therefore become necessary to gain attention by magnificence of promises and by eloquence sometimes sublime and sometimes pathetic"

"The joy of life is variety; the tenderest love requires to be rekindled by intervals of absence"

"Friendship, like love, is destroyed by long absence, though it may be increased by short intermissions"

"Promise, large promise, is the soul of an advertisement."

"My dear friend, clear your mind of can't."

"I am willing to love all mankind, except an American."

"Sir, they are a race of convicts, and ought to be thankful for anything we allow them short of hanging."