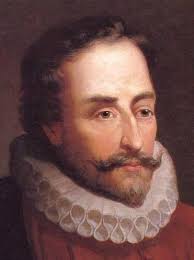 Miguel de Cervantes was born near Madrid in 1547. He became a soldier in 1570 and was wounded in the Battle of Lepanto. Captured by the Turks in 1575, Cervantes spent five years in prison. before he is redeemed and returns home. After previous unsuccessful attempts, Cervantes finally found success in writing in his later years, publishing the first part of Don Quixote in 1605. He died in 1616.

A closed mouth catches no flies.